It is largely thanks to Dian Fossey that the poaching of gorilla has been greatly reduced; the release of the film ‘Gorillas in the Mist,’ three years after her untimely death brought her work to a worldwide audience, and the subsequent growth in tourism has also helped to raise local awareness. The Volcanoes National Park hosts over 76 mammal species and almost half the world’s population of mountain gorillas. Here you can enjoy trekking through the rainforest in search of these wonderful creatures – an exhilarating and memorable experience.

The forest is alive with the calls of colourful birds and chatterings of the rare golden monkey, and every so often there are tantalising glimpses of the magnificent peaks of the Virunga range through the forest canopy.

The range of activities available in the park (other than gorilla tracking for those with permits) includes nature walks, climbing Visoke volcano, trekking to the Karisoke Research Centre, visiting local communities or watching habituated golden monkeys. 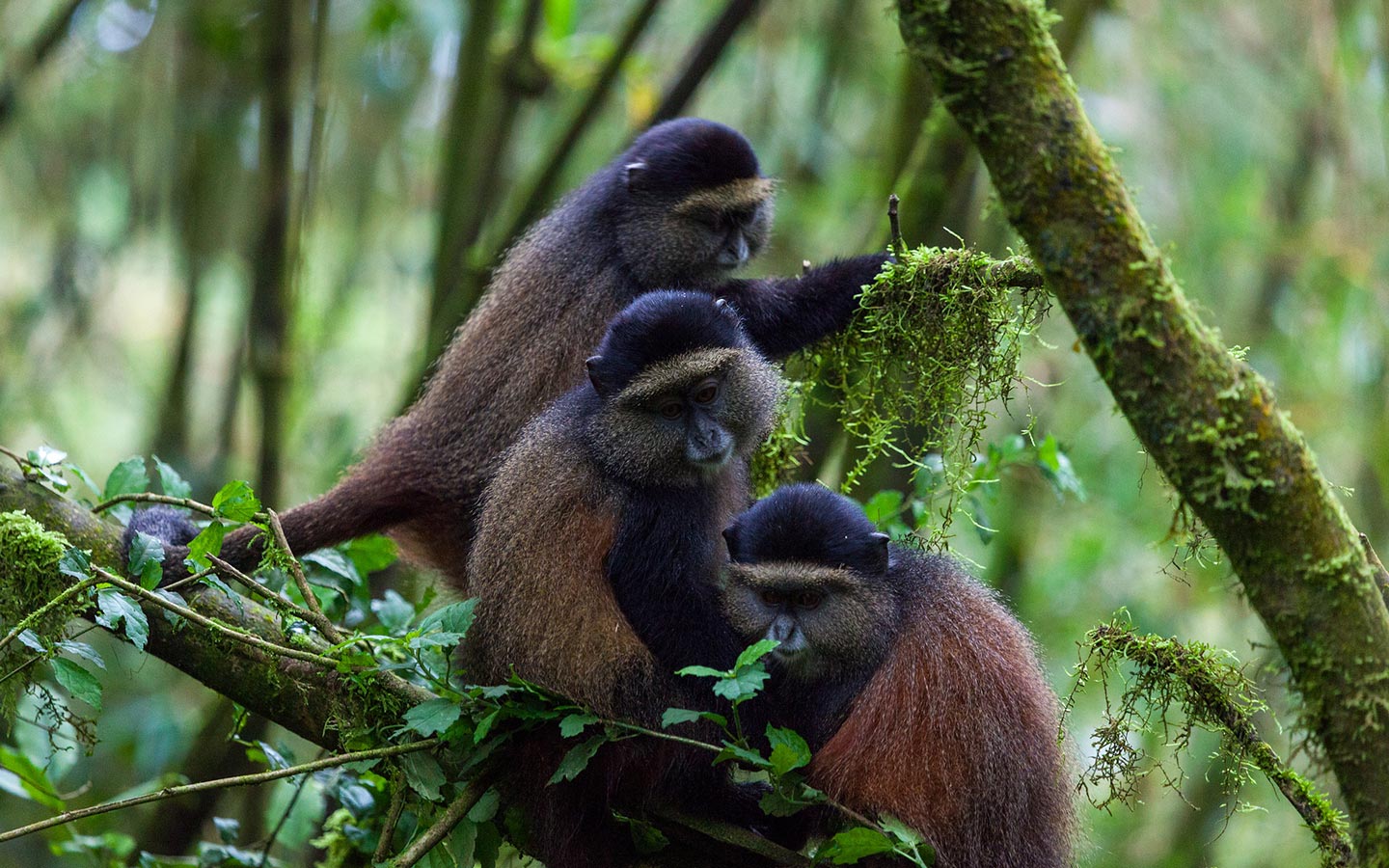 When you go gorilla trekking in Rwanda’s Volcanoes National Park, it is impossible not to be struck by the humanoid nature of these neighbors on the evolutionary chain. While observing so much of African wildlife — warthogs, elephants, giraffes — one marvels at their prehistoric form and questions our placement in the same biological class. With the mountain gorillas of Rwanda, which share 98 percent of our DNA, we are looking into a mirror, and they look impassively back. Time is running out to see these gentle giants in their natural habitat, which is why this experience is at the top of most visitor’s lists.
Volcanoes National Park has 11 habituated gorilla families. In visiting the park, you may come to meet any of them – Susa, Amahoro, Sabyinyo, Ugenda, Hirwa, Umubano, Karisimbi, to name a few.
Each gorilla group can be seen by a maximum of eight people per day. To visit, you must book a gorilla permit in advance, which is priced at $1500 USD each. A maximum of 88 gorilla permits are on offer each day and are given on a first come, first serve basis.
Mountain gorilla trekking starts in the morning with assembly at the park headquarters for a briefing about the activity. This is followed by a hike through the bamboo forests of Volcanoes National Park, keeping an eye out for the gorillas in their natural habitat. The trek can take anywhere from one to six hours depending on the movement of the mountain gorillas across their habitat. You’ll spend a maximum of one hour with the gorillas, where you’ll be able to take photos and videos.

Trekkers are accompanied by trained Tour Guides who are well-informed about different wildlife in the park and will lend a hand along the trek. They could carry your daypack or offer you a helping hand if you were to get stuck in the mud! 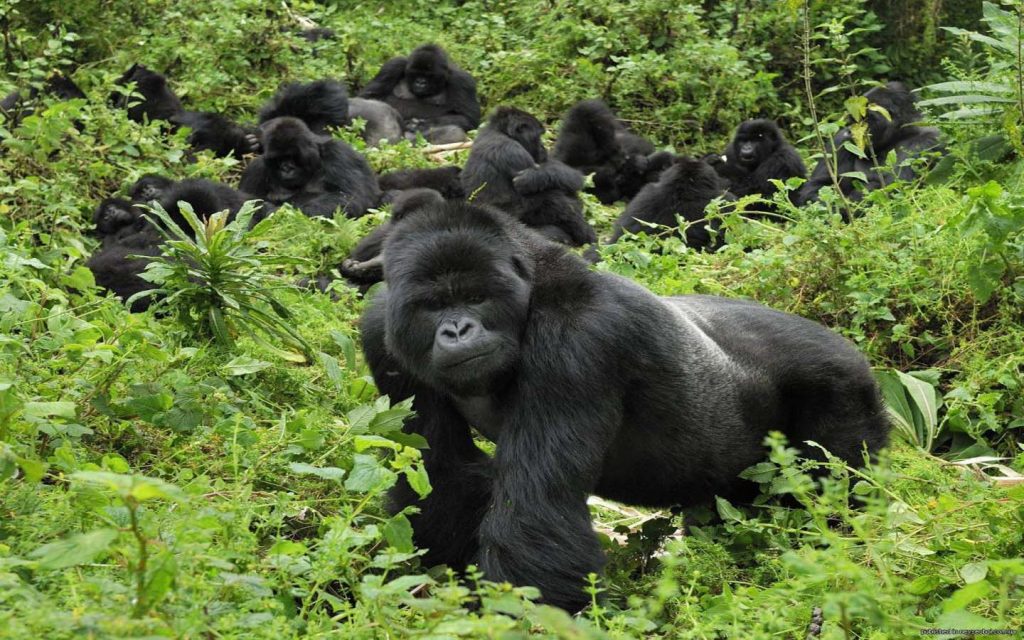 Rare golden monkeys have been sighted in the magnificent Virunga Mountains. Tracking the beautiful golden monkeys is another popular tourist activity in Rwanda’s Volcanoes National Park. A glimpse of these creatures is considered to be a wonderful lifetime experience.
Most visitors book a 3-day gorilla safari package, to experience the golden monkeys in Volcanoes National Park. Like gorilla tracking, this activity starts in the morning with an assembly at Kinigi Park Headquarters.
However, golden monkey tracking is less strenuous than to gorilla trekking, so you’ll be finished by around midday.
At the time of writing, a golden monkey permit is priced at $100 USD. 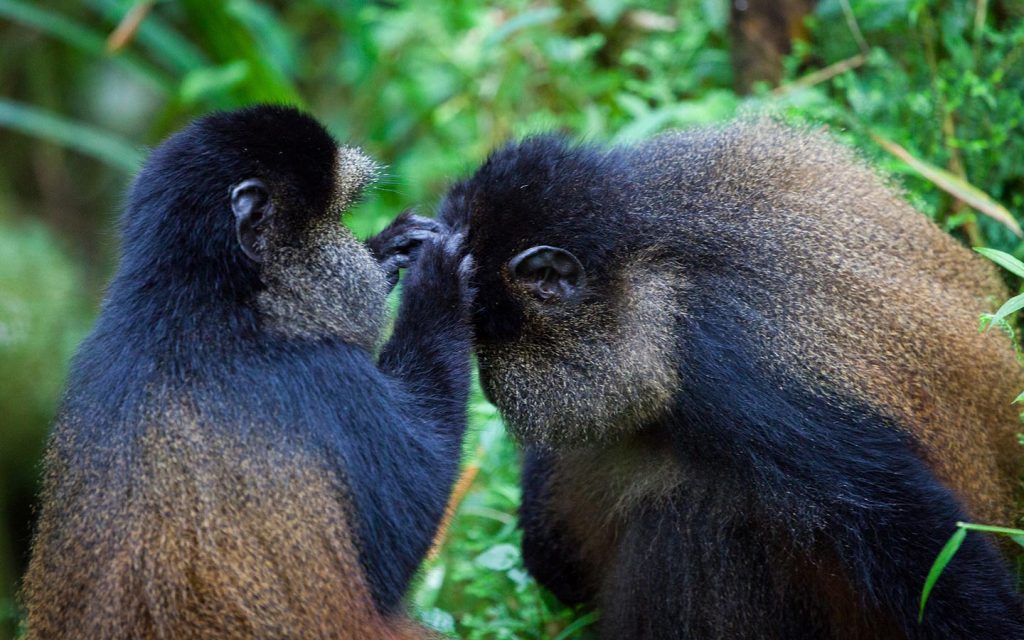 A visit to Volcanoes National Park Rwanda can be mixed up with a hike to the tomb of the late Dian Fossey. Dian Fossey was an American primatologist who spent close to two decades in the park, studying the mountain gorillas. A biopic of her life was made into a movie in the late eighties, titled Gorillas in the Mist. She was murdered by poachers in 1985. Her grave is nestled between the beautiful volcanic peaks of Bisoke and Karisimbi, near Karisoke Research Center.
The hike through the forest to the tomb takes about six hours (there and back). Along the way, you may be lucky enough to see elephants, buffalo, primates like golden monkeys and sometimes even the mountain gorillas that Dian dedicated her life to.

Adventurous travelers can combine gorilla trekking with mountain hiking. Mount Bisoke stands at 3,700 meters above sea level, with a deep crater lake on the top. Hiking Mount Bisoke does not require prior hiking experience; you only need to be physically fit, due to the high elevation and length of the climb. The whole trek takes five to seven hours depending on your speed and the frequency of stops.
Mountain Karisimbi is the second highest volcanic peak in the Virunga ranges and takes two days and one night to experience. While at the top of the volcano, you will enjoy fantastic views of the other five volcanoes and the beautiful Twin Lakes. Near the summit is the Crater Lake, which features drier vegetation than other parts of the park, with giant heather growing all over the slopes of the volcano.

There are many guided and unguided walks around Volcanoes National Park, Rwanda. One of the most popular walks will lead you to the Musanze market, where visitors can interact with the local people. The park features a nature walk to the beautiful Twin Lakes of Burera and Ruhondo. You can stroll around the lakes, snapping photos and videos of the scenery as you go. If you don’t fancy journey on foot, you’ll have the option to go via canoe.
The Nyange Community walk is designed to show all aspects of village life in Rwanda. A guided walk through Nyange community will allow you to see how locals work and earn a living. You’ll tour the homes of ironsmiths, mat weavers, local banana-beer brewers, and carpenters. You’ll also witness and if you choose, partake in the preparation of traditional Rwandan food – not to mention sample the meal at the end!
Another option is a guided visit to Iby’iwacu Cultural Village, on the edge of Volcanoes National Park. There are many cultural performances held here, where you can take part. The Iby’Iwacu Cultural Village convinced ex-poachers to turn their back on gorilla poaching. They now make their living performing for tourists. A tour to Iby’Iwacu Cultural Village allows you to see the traditional house of a local king as well as the herbal mixtures preparation by an authentic medicine man. You can take part in arrow and bow shooting, or enjoy Kinyarwanda cultural music, dances, and drumming performed by local people. You’ll have the option to explore local areas on mountain bikes through different routes with a guide.