Mountains of the Moon

Undoubtedly one of Africa’s most beautiful and dramatic natural environments, the Rwenzori, or ‘Mountains of the Moon’(link: https://7summitsafrica.com/2017-expedition/national-parks/), are also among its least visited. They offer an example of nature at its most wild and untamed, totally untouched by industry or human habitation, and teeming with life.

Indeed, the word ‘prehistoric’ often features in descriptions of the Rwenzori Mountains, and with good reason. The Rwenzori range is home to rich and varied vegetation, from dense rain and bamboo forests, to valleys of giant heathers and lobelias. Much of the vegetation is endemic to the region, for which reason the Rwenzoris are now a protected World Heritage Site.

This Unesco World Heritage ( https://whc.unesco.org/en/list/684 ) contains the tallest mountain range in Africa, including several peaks that are permanently covered by ice. The three highest peaks in the range are Margherita (5109m), Alexandria (5083m) and Albert (5087m), all on Mt Stanley, the third highest mountain in Africa. The mountain range, which isn’t volcanic, stretches about 110km by 50km wide and is home to an extraordinary number of rare plants and animals, and new examples of both are still being discovered. Two mammals are endemic to the range, the Rwenzori climbing mouse and the Rwenzori red duiker, as are 19 of the 241 known bird species. Despite this, this is one of Uganda’s less-visited national parks, and so nature lovers wanting to escape the safari crowds should definitely put it on their list.

Wild and remote, the Rwenzori Mountains provide a tough but rewarding trekking environment. Due to the low number of visitors, the few trails that exist into the mountains are not at all well-trodden, with many of them relatively new. Prospective trekkers should be forewarned that the weather and terrain can make proceedings difficult if they are not well prepared. The rewards, however, in the form of the unique and beautiful scenery, will more than compensate your efforts. 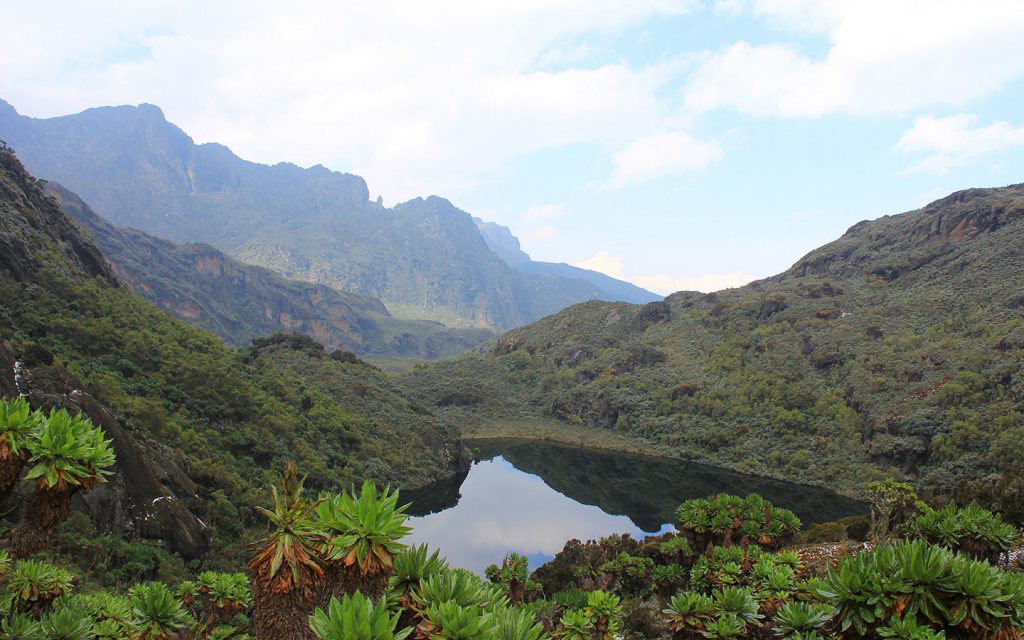 The Rwenzori Mountains National Park provides stunning views of glacier and snow-capped mountains just kilometres from the equator, where it is contiguous with the Virunga National Park in the Democratic Republic of Congo (DRC). Having the third highest mountain in Africa at 5,109 m (after Kilimanjaro and Mount Kenya), the Park includes a much larger alpine area than either, covering an area of 99,600 ha of which 70% lies at over 2,500 m in height. The Rwenzori Mountains are the highest and most permanent sources of the River Nile, and constitute a vital water catchment. Their multitude of fast flowing rivers, magnificent waterfalls and stratified vegetation make the property exceptionally scenic and beautiful. The mountains are well-known for their unique alpine flora which includes many species endemic to the Albertine Rift in the higher altitude zones including giant heathers, groundsels and lobelias. The Park also supplies local communities with various wild resources and is an important cultural heritage. 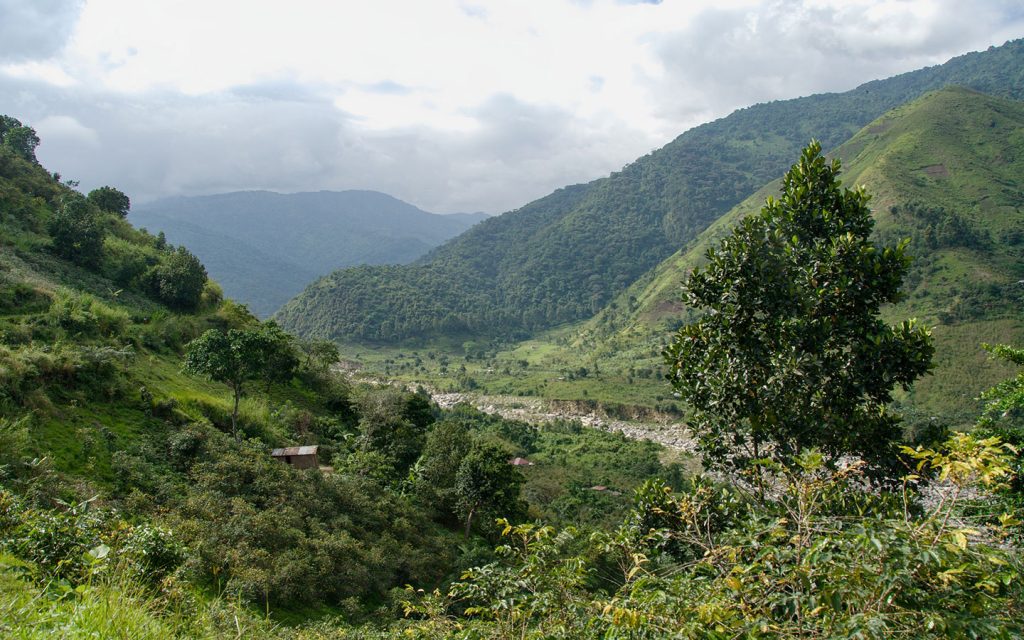 Back in Uganda’s heyday, the Rwenzoris were as popular with travellers as Mt Kilimanjaro and Mt Kenya, but this is definitely a more demanding expedition. The Rwenzoris (known locally as the ‘Rain Maker’) have a well-deserved reputation for being very wet and muddy, with trails that are often slippery and steep. There are treks available to suit all levels and needs, from one-day jaunts in the forest to 10-day treks with technical climbs. The six-day treks are the most popular.

Two companies offer trekking in the Rwenzoris: the popular Rwenzori Trekking Services, which looks after the Kilembe Trail, and the community-owned Rwenzori Mountaineering Services based in Kasese, which arranges treks from Nyakalengija. The Muhoma Nature Trail is open to all, but Ruboni Community Campsite can assist with arranging guides, as can Uganda Wildlife Authority (UWA).

The best times to trek are from late December to mid-March and from mid-June to mid-August, when there’s less rain. Even at these times, the higher reaches are often enveloped in mist, though this generally clears for a short time each day. April and October are the wettest months.

Guides, who are compulsory even if you’ve conquered the seven summits, are on perpetual standby so you can book in the morning and leave the same day.

Walking trails and huts are in pretty good shape, particularly on the Kilembe trail, where huts use polynum insulation to make life more comfortable. There are wooden pathways over the bogs and bridges over the larger rivers, lessening the impact of walkers on the fragile environment.

There have been reports of tour operators working with child porters, not engaging in environmentally sound practices or not offering the amount of food or quality of shelter promised. You also need to ensure your guides always boil your drinking water, or bring materials to purify it yourself. Seek detailed information about your trip before signing up and provide feedback to Lonely Planet if you have observations to share.

Note: trekkers should confirm that their travel insurance policy covers adventure/mountaineering activities above 4000m and rescue. Otherwise, rescue costs start at US$150 to US$10,000 per hour for a helicopter.

Trekking Routes in the Rwenzori Mountains

The peaks are accessed via two routes: the Kilembe Trail and the long-standing Central Circuit that starts from Nyakalengija village. For those short on time there’s also the two- to three-day Muhoma Nature Trail, a 28km circuit set up by UWA in 2012 that’s a shortened version of the Central Circuit. 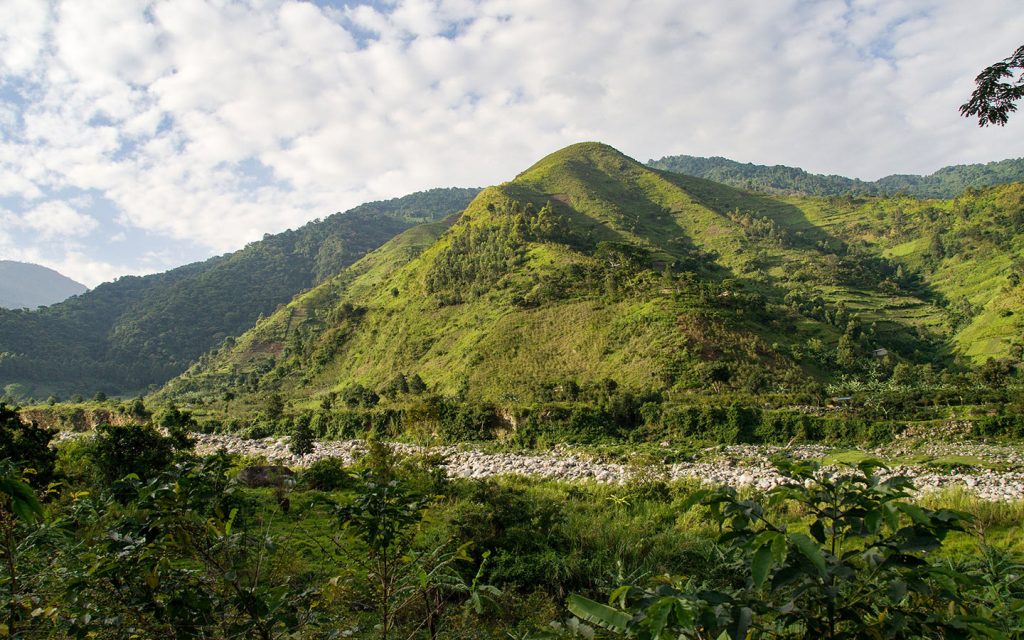